In Memoriam: Minoru Mori – Some of us are lucky to meet great men. I was lucky to work with one.

The late Minoru Mori of Mori Building Co. Ltd. taught me that a tenacious grasp of conviction and a healthy appreciation for new ideas leads to a lasting legacy of inspiration.

In a densely populated urban environment with traditions based on communities that have lived on the land for generations, he was the ultimate village wise man. To hear how he lead the town hall meetings over the more than 20 years it took to get agreement from hundreds of residents for a new use of their land is to imagine generations of leaders before him in towns and villages across Japan debating ways to care for their community. It is a similar debate taking place now in earthquake, tsunami and nuclear crisis Tohoku.

In my exchanges with Mr. Mori you felt listened to by this soft-spoken, unassuming man who was literally one of Japan’s post-war architects. We would not always agree on a way forward but you knew he took your ideas into consideration and very often was willing to risk conventional wisdom if his instinct and experience led him.

I remember waiting on the 98th floor of the then still under construction Shanghai World Financial Center for him to arrive for a photo session. The 1, 614-foot structure could only be reached by open cage elevators and was teeming with Chinese construction workers and building equipment. As his handlers looked at one another nervously, Mr. Mori thought nothing of a suggestion to sit and pose in the middle of this scene. All I could think was ‘here we are witnessing Japan and China build a world financial center in Shanghai with the principle visionary; one of the world’s great urban planners, in a hard hat and work overalls’.

I am grateful and honored to have shared precious moments with Minoru Mori and hopeful that Japan creates an environment for many more like him. 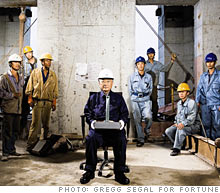